Budapest has been dubbed the Paris of the East and rightly so. This city’s tourism is going through the roof and definitely deserves a visit.

How to get there

If you have a Eurail or Interail pass then you can do this online, otherwise you can simply book a ticket at the locoal train station the day before or even the day you wish to go. Doing it directly will save you a lot of money as you aren’t paying any middle man fees. However if you want to book online beforehand you can do so through Rail Europe.

The train station is central to the city and you can connect to the underground metro to go anywhere you need to from there. Single tickets are 350HUF ($1.50). Or you can take the 78 bus from Keleti station (where most trains pull in) to the Jewish Quarter. 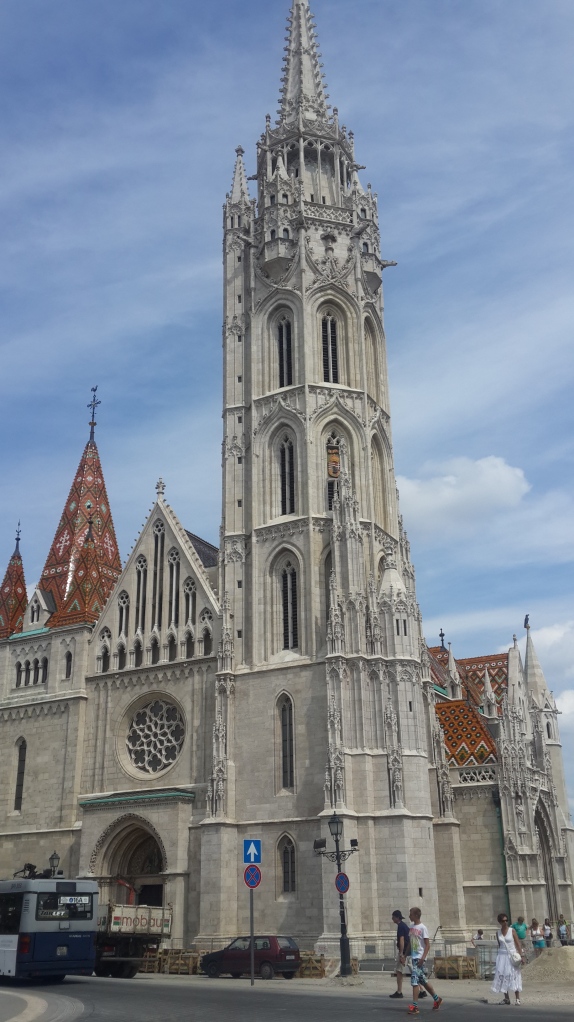 Budapest is fast developing a reputation for a party backpacker city, so there are many hostels to accommodate the growing market. It is better to stay on the Pest side of the river (right side) as this is where everything is happening, and it is not that fast crossing the river if you’re staying on the Buda side.

Retox hostel is the most well known social party hostel. It’s bar is famous for its house parties and their facilitation of tickets to other parties. By looking at the lobby and bar you may not be so keen to stay here as it looks a bit grungy, but the rooms are super clean and tidy.

Wombats hostel is another well known hostel as it is a part of a chain all around central Europe (run by Australians). It is in an amazing location next to all the nightlife ruin bars, shops and cheap eateries. It has huge modern lobby and bar with happy hours where it is easy to meet other people. The rooms are modern and clean and given its great reputation it is the same decent price as most other hostels in the city.

If you’re looking for somewhere a little smaller, stay at Unity Traveler Hostel. This is on the same street as Wombats but has a very homely feel to it. There are only a few dorm rooms which are very spacious and clean. The ensuites are huge with two showers and sinks for 6 people, which for those who stay in hostels can appreciate this is a generous ratio. There is a nice lounge common room where music is playing and people chill out on the comfy couches.

Even though it’s smaller it’s still filled with young social people so you won’t miss out on that aspect. Breakfast is included and is around a big table which is nice to get chatting to people. They’re super generous and supply free coffee/tea/hot chocolate and snacks throughout the day, making it feel like a luxurious hostel! This is in the Jewish Quarter which is the best area to eat and shop, as well as being in the middle of the nightlife ruin bars.

1. Drink the tap water! Don’t waste money on buying bottles all the time. However if you are buying water, take note of the colour of the lid. Pink is sill and Blue is gas water.

2. When paying for the bill, if you say thank you when giving it to them, they will assume that you don’t want change back. So instead, just smile when you give it to them.

3. The transport system is really thorough but the ticketing system is not. On the buses and trams you can hop on the middle door and they won’t check your ticket, but they will on the metro and train so be careful!

4. Be careful when you change your money with all the zeros on the notes. Also, if there is a 15HUF or more difference between their buying and selling rates, they’re ripping you off and you can find better!

Budapest is a really large city and has numerous different areas to it with different things to see in each. It is a little tricky getting your orientation to begin with, so I’d recommend doing a walking tour on your first day.

1. Do a free walking tour

If you’re staying in a hostel you will see the blue and red brochures for Free Walking Tour. They are really thorough, interesting and of course free so this is a must! It is a good way to start off your trip and see the essentials to begin with so you know what to revisit.. You discover the Pest side of the city and St Stephens Basillica and then cross over to the Buda side and visit the castle and church for a spectacular view of the whole of the Pest side.

The guide is really funny and never boring with their historical explanations, and you just can give them a small tip at the end to say thanks. You get a thorough map and little book of helpful tips and phrases for the city.

View of Pest from Buda side

2. Eat and stroll the Jewish Quarter

This is a really trendy for younng people to eat, shop and go out. Take a wander down the streets, especially Kiraly Utca and you’ll think you’re in Fitzroy- hipsters eat your heart out!

If you want some traditional dishes, try the Goulash (a meat and vegie stew soup) or the Paprikash (chicken marinated in a paprika style sauce).

3. Visit the House of Terrors

This is a museum about the occupation of Hungary by both Germany and the Soviet Union. Usually I find museums really boring and a waste of time, but this one was spectacular. The exhibits are all different rooms decorated in theme with an era of time and has old videos and uniforms to describe what was going on. 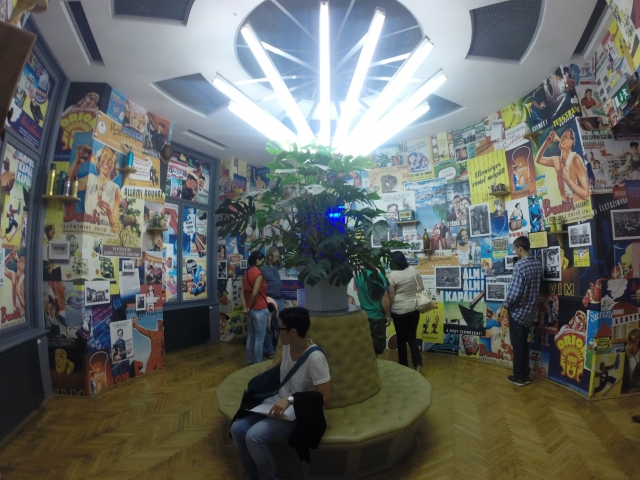 4. Soak in the bath houses

There are over 10 bath houses in Budapest; some turkish and some not. There are two most famous ones that are both very impressive and relaxing.

Szechenyi bath house is on the Pest side in the middle of beautiful gardens and is where they hold the spartiies and is  very asthetically pleasing with its gold buildings. There are two big outdoor spas, numerous indoor pools, steam rooms and saunas all ranging different temperatures. I spent about 10mins in each bath/area and rotated around for a few hours. 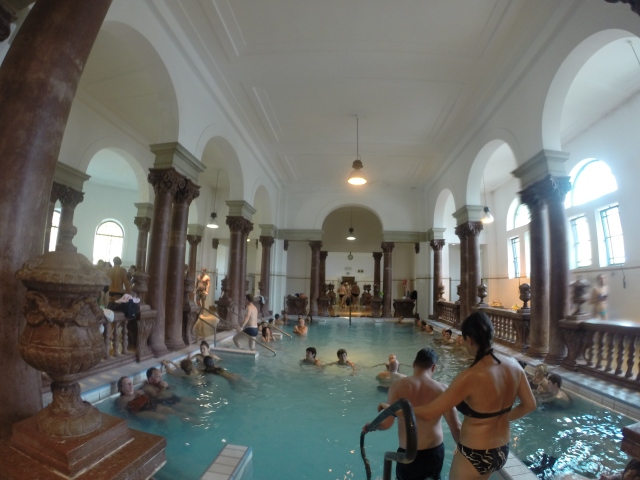 It is 4100HUF ($20) to get in and you get a locker to store your things. You can also rent a towel and buy massages and other therapy treatments. You can get there by Metro 1 in the direction of Mexikoi Ut at stop Szechenyi furdo and walk through the park.

Gellert spa is the other spa on the Buda side of the river. It is slightly smaller than the other, but has a really nice outdoor area with a wave pool which is fun. It costs 5300HUF ($27) to get in here and they also have the same facilities. This spa is slightly less busy but is also smaller.

4. Do a communist walking tour

If you have been to the House of Terrors or have read up on the history of the occupation of Hungary, this will interest you a lot. It is a free walking tour that takes you through the affected areas of Pest and comparea architecture and town planning pre and post occupation. It gives a great insight into the communist life in Hungary and is really important in fully understanding the city and its history.

5. Visit the Parliament building on the waterside

This is a really stunning building and has a large pedestrian area around it which is full of tourists. Make sure you check it out from all angles, and from both the Buda and Pest sides to get some great photos

6. Take a tram down the river

This is a scenic 30min tram ride down the waterfront and is a nice way to see a lot- the Chain bridge, Parliament and a view to both Castle and Gellert Hill.

If you’re there in summer, there will always be a festival on either for a day, two days or a week. Do some planning and see if there is anything you want to go to- Hungary hosts some of the best festivals in the world.

8. Walk the chain bridge onto Buda side

There are numerous old ruin buildings which have had a bar placed inside them and have become the trendiest bars in the city. Most of them are located in the Jewish quarter and there are many to choose from. People usually start at the most famous one Szimpla, then hop to a few more in the area.

The most popular one is Szimpla Bar and it is absolutely incredible. This is definitely a place that has taken grave effort into its decorating! In sticking with the old theme, there are old school objects and sign posts stuck up on all the walls and roof. Rooms are themed with different objects, like for example one has big old computer monitors playing a kaleidescope pattern continuously. There is two stories to this bar with many different rooms and bars full of backpackers and locals so it is great for meeting people! To get cheap drinks, go to the bar furthest from the entrance- they seem to jack up the price for the bars at the front for people who first walk in!

If you’re up for a dance, Instant nightclub is the most well known and is walkable from the ruin bars. It is absolutely flooded with tourists but it is great fun. There are 3 levels with over 5 different dance floors, games rooms and beer gardens.  It’s free to get in and is guaranteed a fun time and easy meeting other travelers.

One of the most famous things to do in Budapest is visit the spa baths, and this is enhanced on most Saturday nights where they host a party at the Szechenyi spa (hence sparty). It holds nearly 1000 people and is 25Euro for a regular ticket. It is absolutely insane and surprisingly classy, with dim lights enhancing the beautiful golden baths. You have a locker for your stuff, it runs until 4am and is probably the best pool party you will ever go to.

Otherwise, walk around the Jewish Quarter, in particular Kiraly Utca (street) and you will see at least 10 places to drink at within a 15minute walk. This is the cheap and young area which is filled with bars and cafes. Places such as Kolor,Mika Pub, Filter Pub, 400, Lokal Pub are great. Budapest does not dissapoint in nightlife that’s for sure.

How long to spend there

I would recommend absolutely no less than 3 days up to a week.

For more information check out Lonely Planet’s guide by clicking below.

One thought on “Guide to Budapest”