What to expect when you go to Ibiza

What to expect when you go to Ibiza

Coming from Australia, we have a certain perception of what Ibiza will be like: an island full of people in bikins partying on the beach 24hrs a day.

It’s known all over the world for the best parties, nightclubs and DJ appearances. However, it’s also known for its extremely high prices, making it usually an impossible destination or a splurge for backpackers.

I had no idea what to expect when I got there but here are some tips to let you in on what it will be like!

The island is bigger than expected

Before I came I imagined one main street with clubs, bars and cafes galore, but this couldn’t be more wrong! Ibiza has many different towns and areas all over the island. The most popular are Ibiza Town and San Antonio, with many others scattered around the island. I stayed in a resort on the north of the island which just had a few shops around it but seemed like a ghost town.

View from our accommodation

Everything is really spread out

Most of the clubs are in the middle of nowhere off a highway. We surprisingly found this out when we were in Amnesia nightclub and loaded our Google Maps and thought it was broken because there was nothing around us! Each night we had to drive around 30mins in a taxi to get to a club. My envision of the clubs all lined up in a row where you can waltz into any couldn’t be more wrong. Once you’re in a club you’re staying there!

To save money: If you already know some of the clubs you are going to, try and pick some accommodation nearby to save you this time and money on a cab.

You have to take taxis everywhere

The public transport isn’t very prominent (or at least I never saw any) which means you end up in a taxi every time. Not only this, but the meter ticks over faster than you can count so be prepared to keep up to 40euro for a taxi home if you’re by yourself.

To save money: Split a cab home with friends and this will save you a heap!

Club entries are through the roof

If you pay entry to a club at the door, be expected to pay anywhere from 40-70 euro! This depends on what DJ is playing that night and when it is (July tends to be the most expensive). You can also buy these entry tickets in advance from promoters all over town which can save you some money.

To save money: If there is a DJ you want to see, buy the ticket well in advance before you get there. If you’re going to go to that club anyway, there’s no point waiting until you get there because it’ll just cost you a fortune! 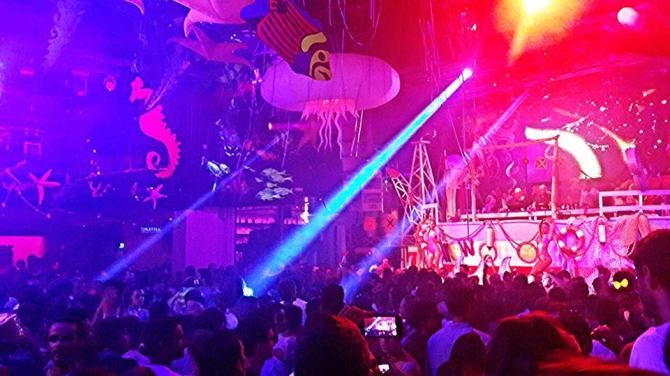 You cannot afford any drinks

Buying drinks in the club are the most expensive part! For water, you will pay 9euro for 330ml and for a mixed spirit be prepared to pay up to 25 euro for one!

To save money: Pre drink like there’s no tomorrow! Drinks at supermarkets are cheap so make the most of this because as soon as you step in the club you can’t afford to keep going!

Everyone is off their head

For those who haven’t been to these kind of nightclubs this will be a huge eye opener for you! Everywhere you look people will be wearing sunglasses in the dark, raving in the same spot for 8 hours and losing control of their facial muscles. Don’t worry, no one is ever violent because they’re too busy having the time of their life so just ignore it!

Lounge during the day

Expect to go out at 2am

The clubs are open pretty much until the next afternoon, so it doesn’t get busy until 2-3am as people are heavily pre drinking before they arrive. This means it doesn’t usually get good until after 4am so prepare your body for a long night!

To save money: Use this time wisely to pre drink and bring a water bottle filled with alcohol in the taxi with you so you don’t sober up on the way!

Ibiza is out of control and totally different to what I expected, but you just have to keep an open mind and roll with the craziness!